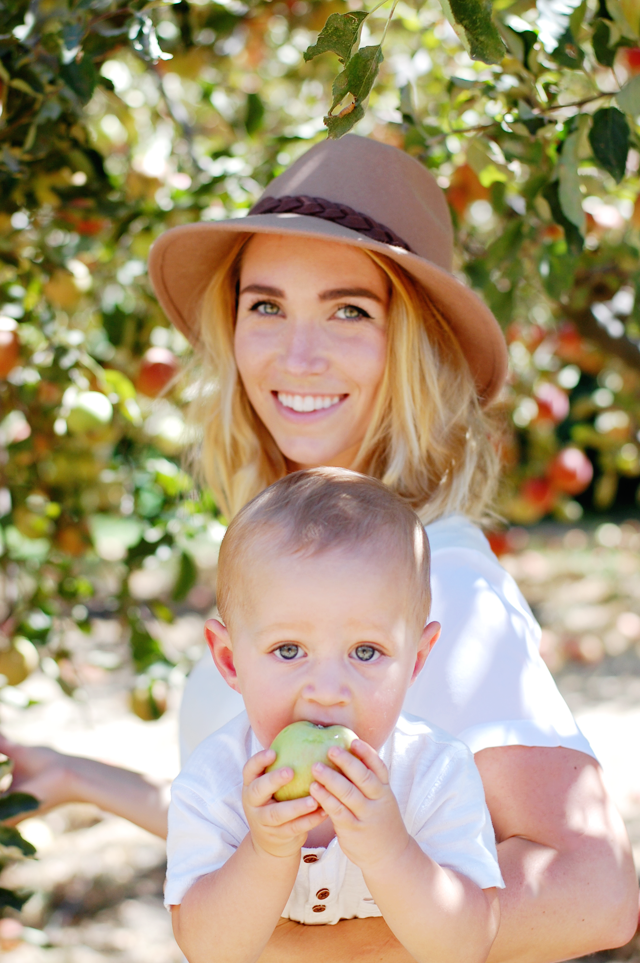 Last week we put on our adventure hats (literally and metaphorically... at least I did) and took the almost two hour drive out to Riley's Apple Farm in Yucaipa. One of my oldest and best friends, Katie, came down for a visit in between her intense med school student schedule. She chose to spend her precious free time with us! Isn't she a peach, er, I mean apple? She is quite literally the life of the party. 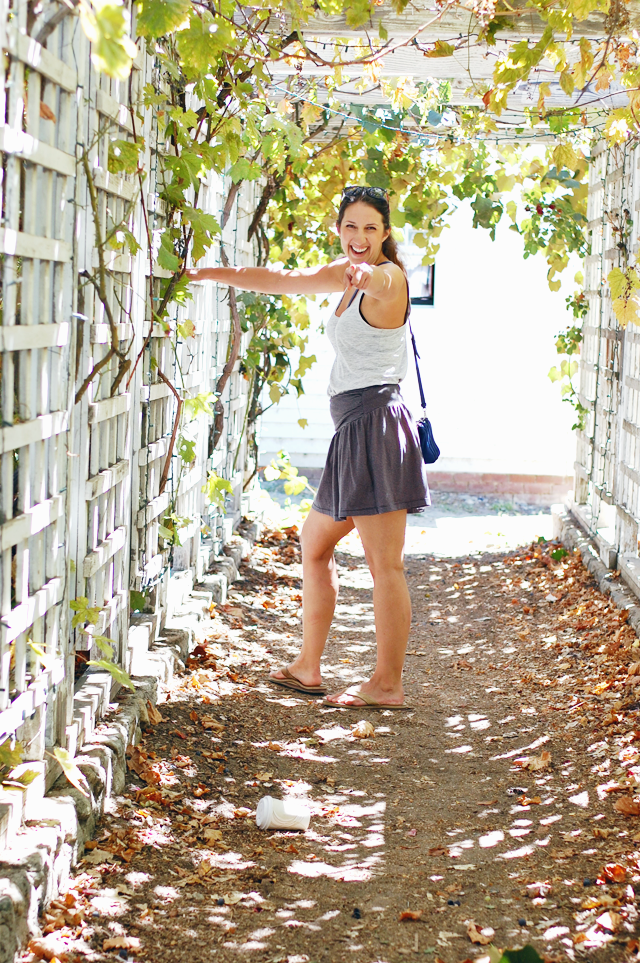 And her presence compels me to do things like this... 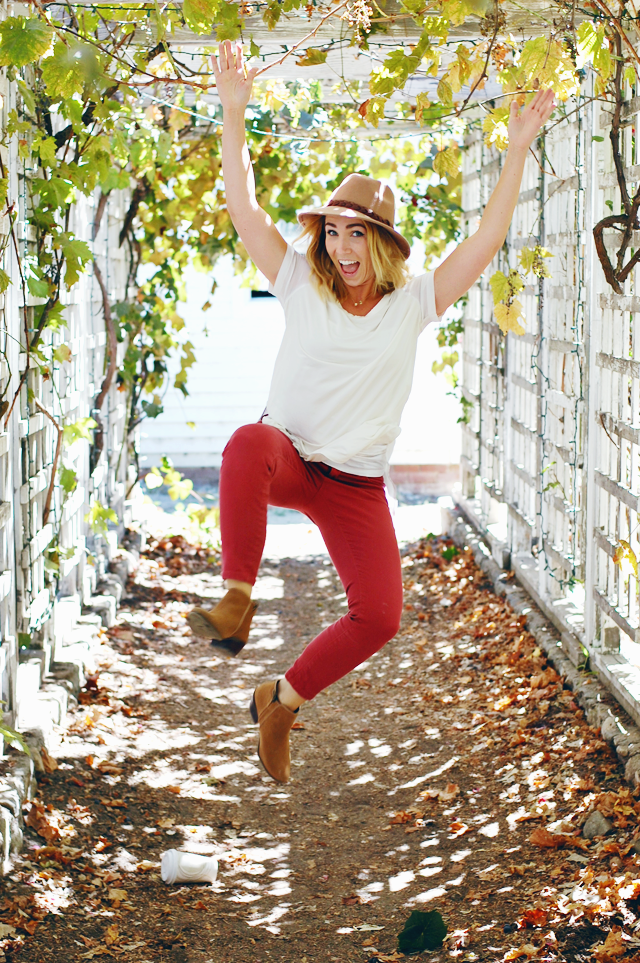 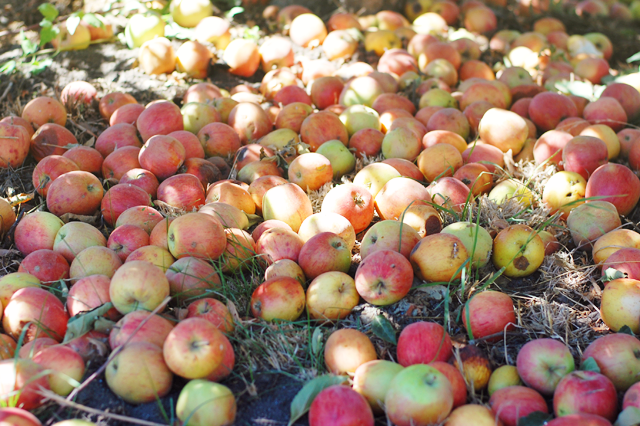 This trip to the orchard to pick apples was a first for both Luke and Wes. And to say they loved it would be the understatement of the year. Wes was shoveling those galas as fast as his little fists could grasp for new ones. Clearly his options were endless. 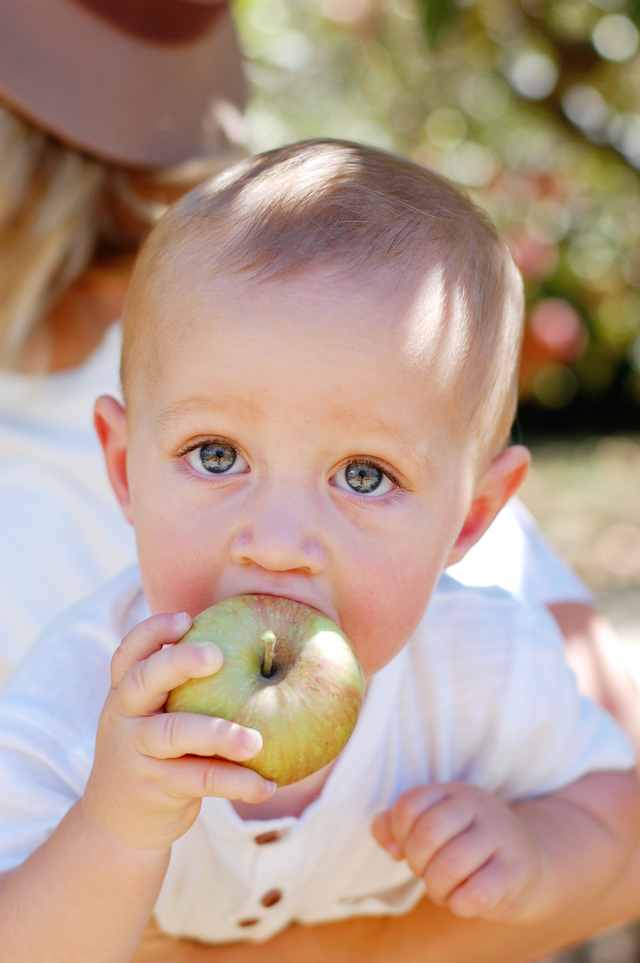 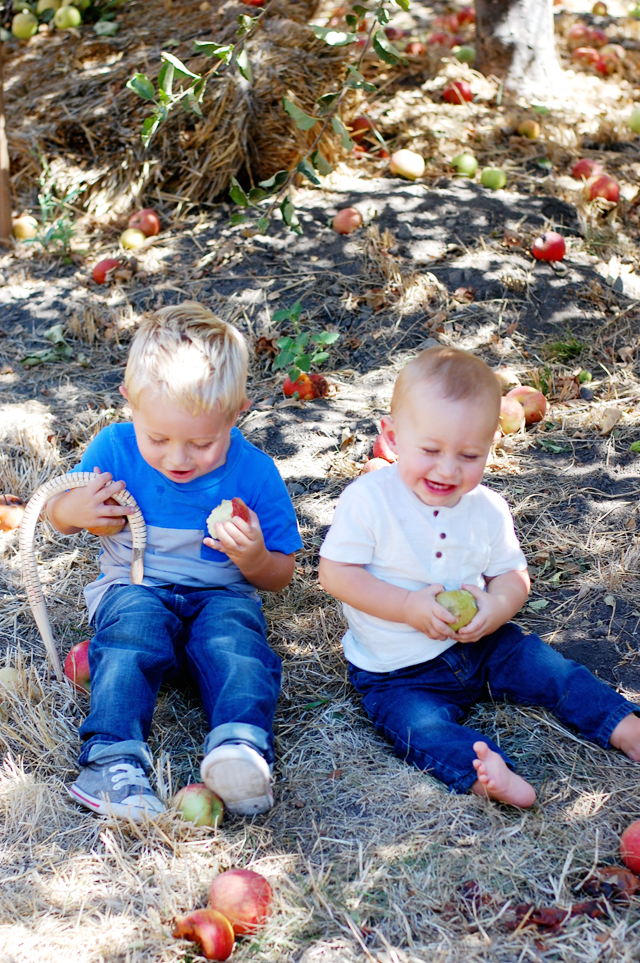 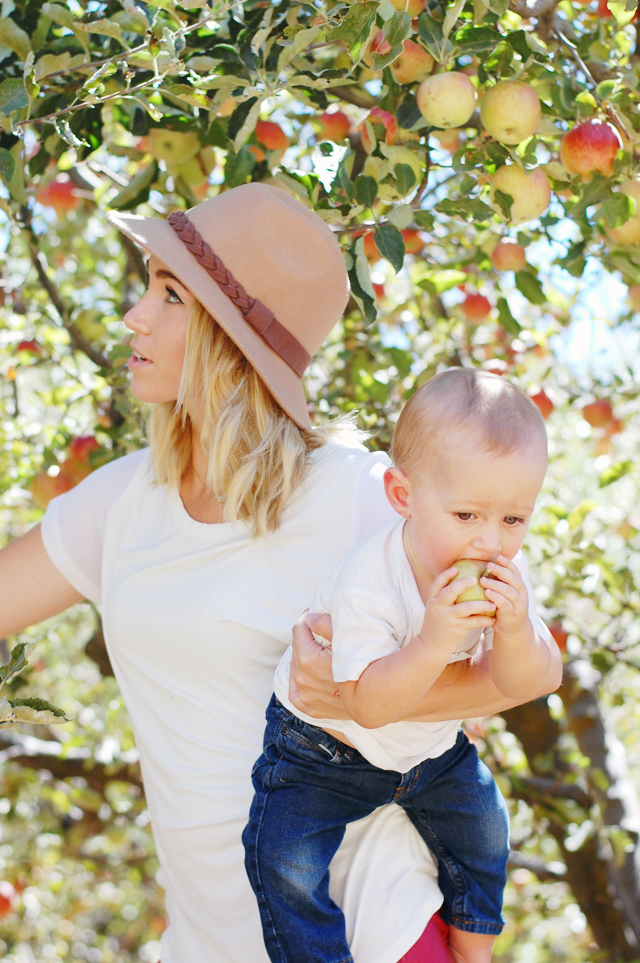 Luke thought all of the apples were dang tasty and wonderful, too. I am pretty sure he polished off about four apples in the first 45 minutes. Down to the core and all. 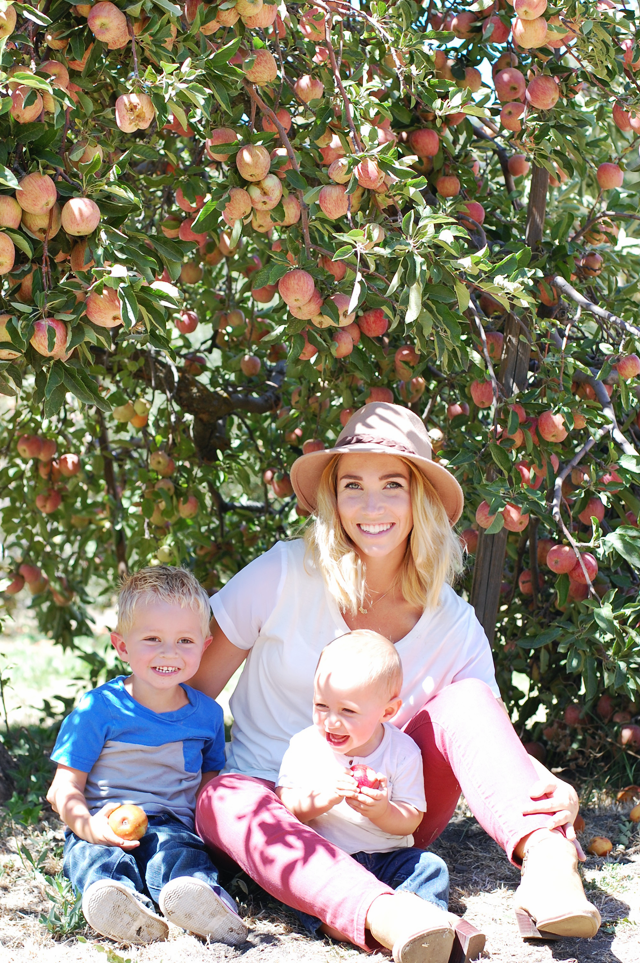 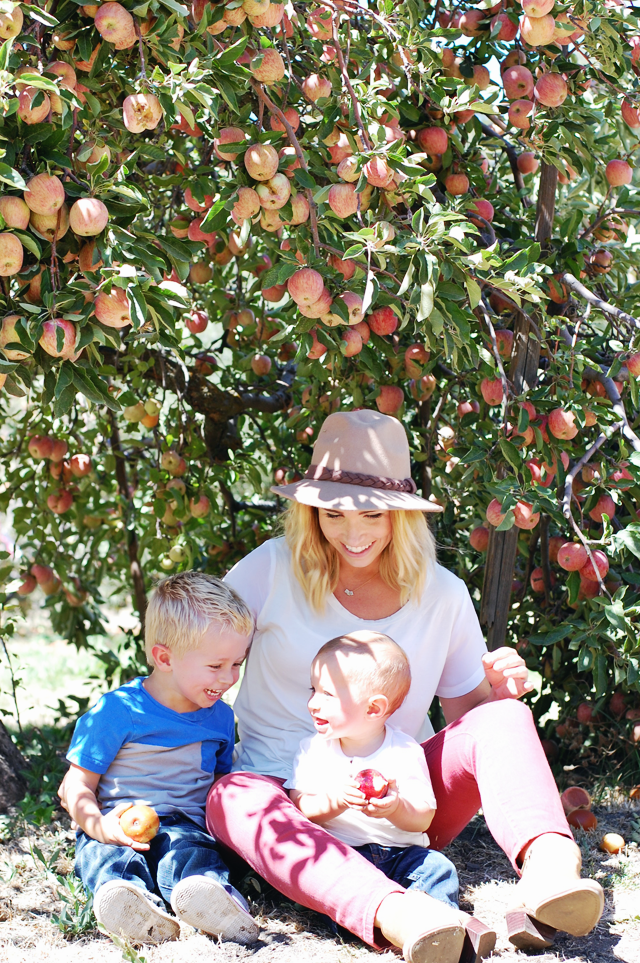 Don't ask me why I thought white would be a good idea. A baby and a toddler at the apple orchard equals dirt. EVERYWHERE. Wes had it all down his chin, which was subsequently transferred to my left shoulder because my hip is his favorite perch and my shoulder is his best teething toy. But at least we coordinated, right? ;) 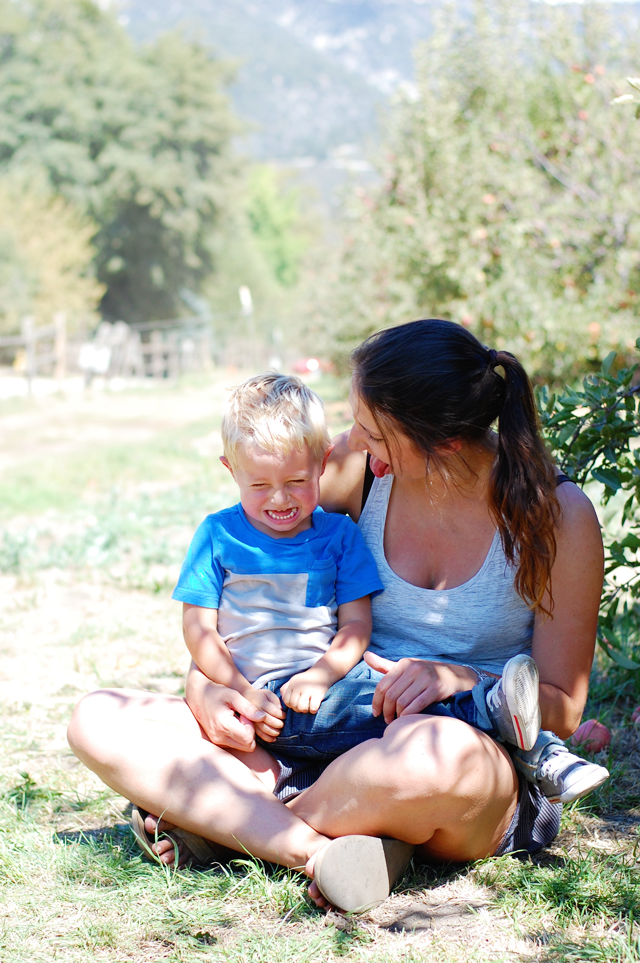 Katie and Luke bonded in a way that cannot be compared or described. The lineup of faces they pulled deserves its own coffee table book. Side story: Katie brought her pediatric textbook, and we were attempting to diagnose a little bump Luke had on his face. Somehow or another, the topic of cold sores and herpes came up in discussion. The next thing we know, Luke runs up to Katie, stared her square in the face and said, "Luke wanna give Kay-tee herpees!"
You guys, we died. DIED. Then he started talking about penises and vaginas (we are working on the correct anatomical names so he has a chance at being mature, unlike me and Matt), and proceeded to ask, "Katie has vagina? Katie no have penis!"
I'm raising a pack of wild animals over here with no filters whatsoever, just like their mother! Heaven help me and my poor children. 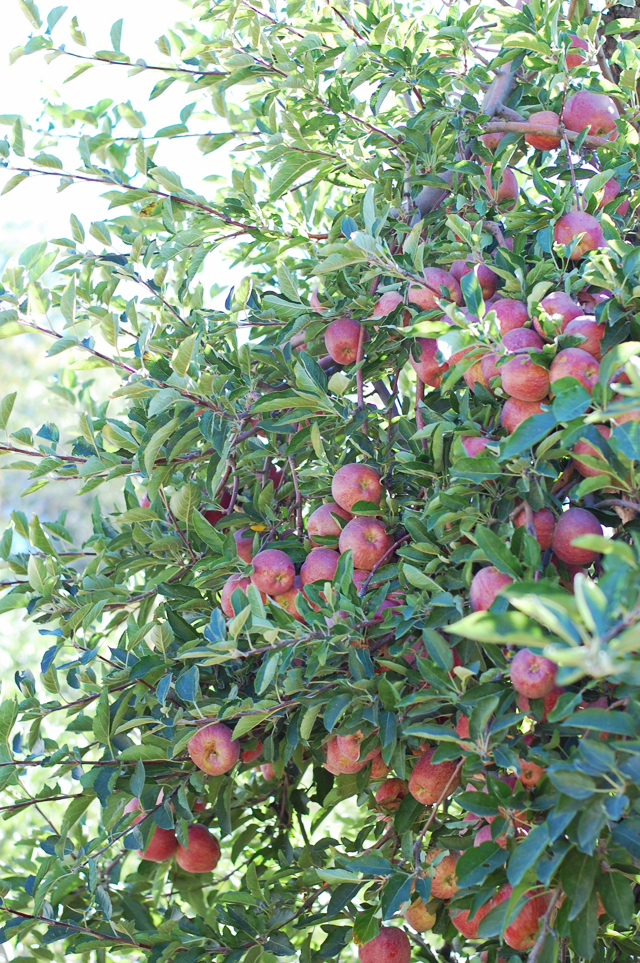 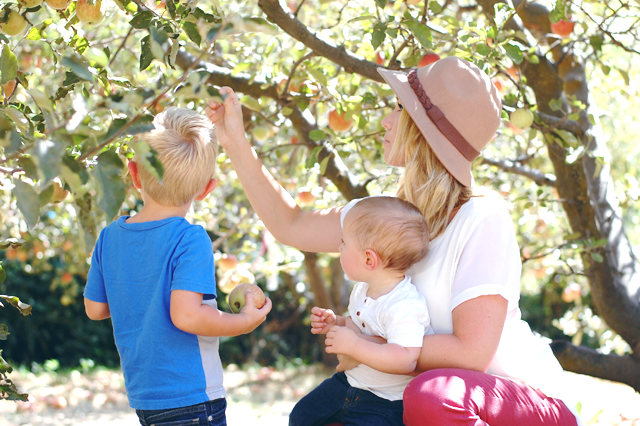 Anyway! Apples! Red delicious! They actually were all incredible. Nothing compares to fresh, organic produce straight from the source. Just ask Wes... 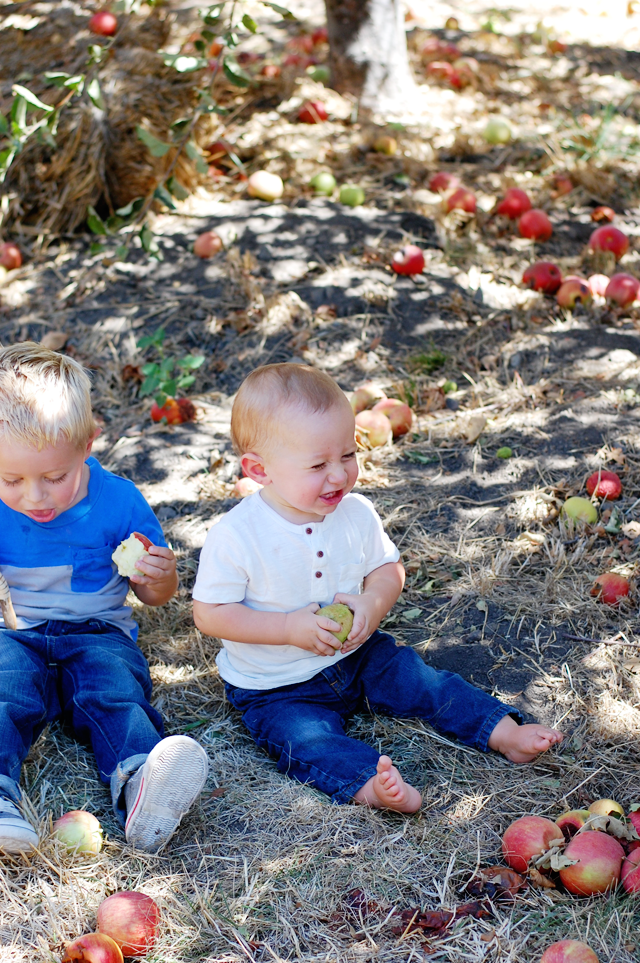 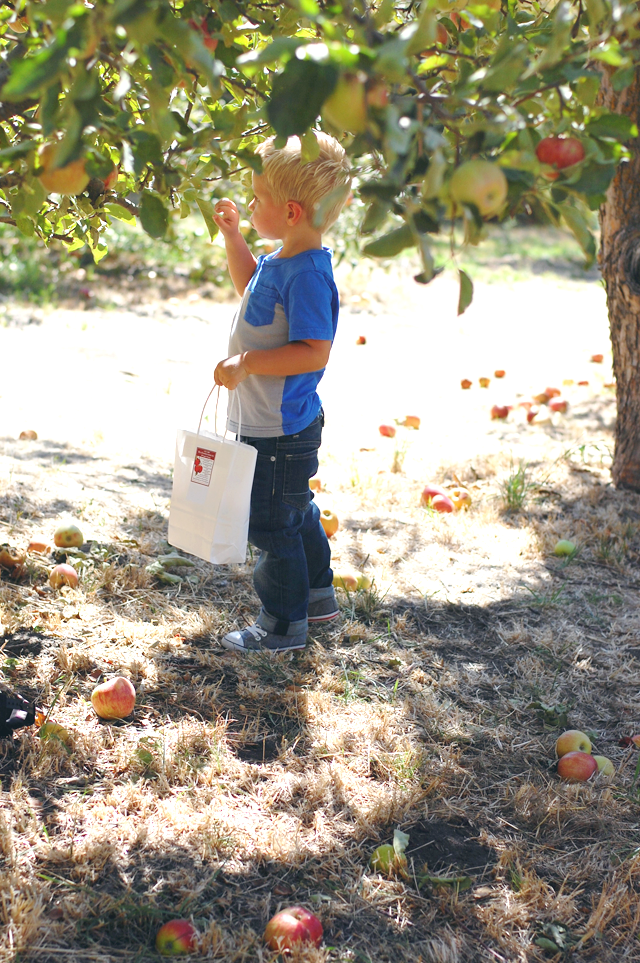 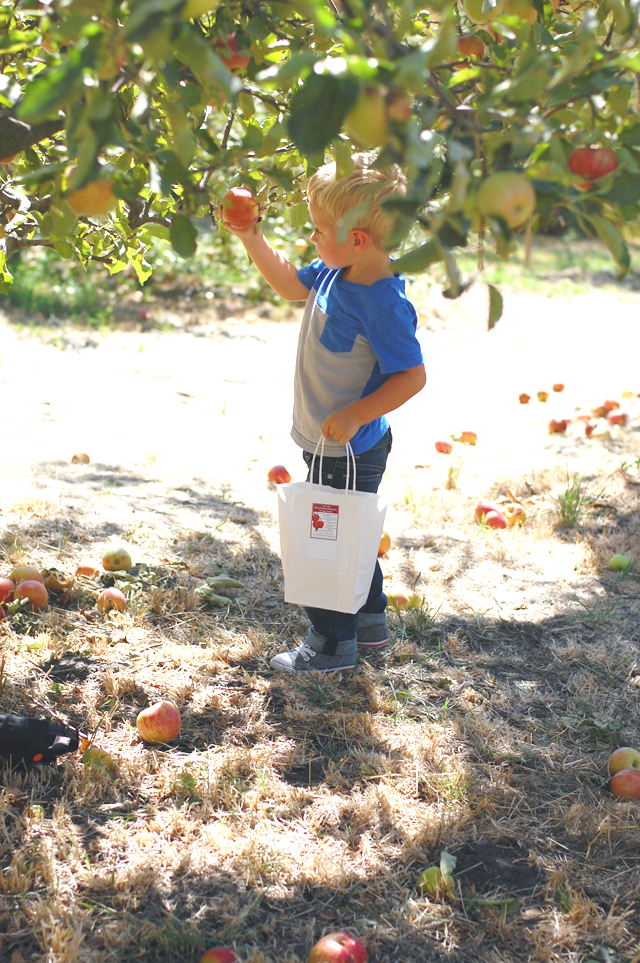 Awwww. Isn't he the sweetest? I can't get over how huge he is. How huge either of the boys are! Wes turns one this month! What the? 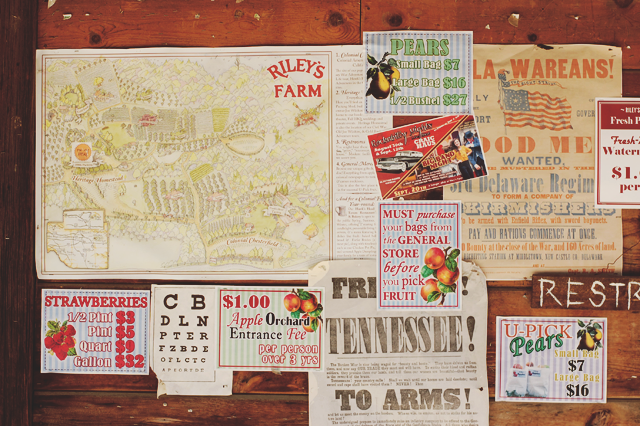 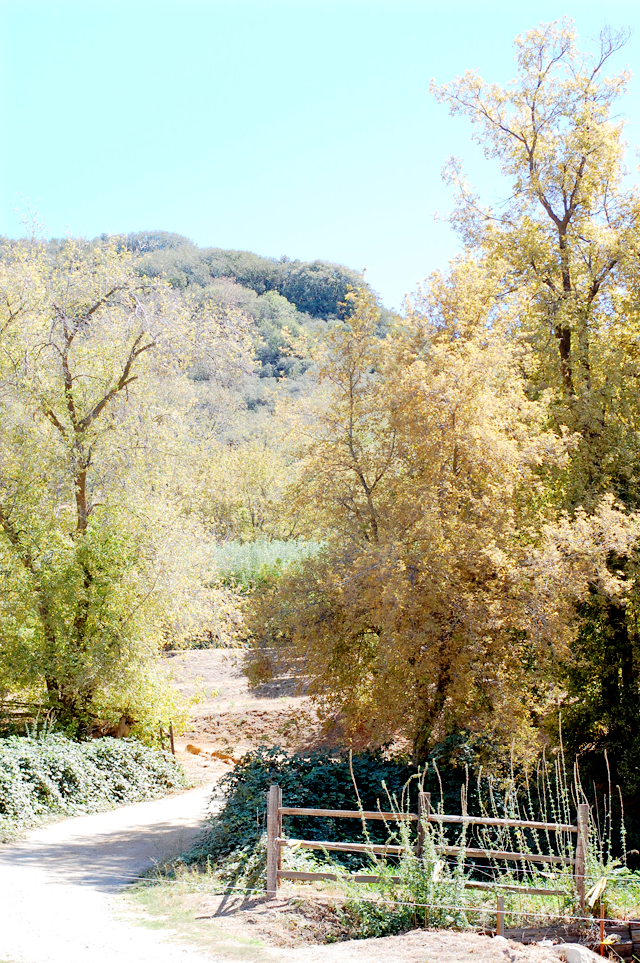 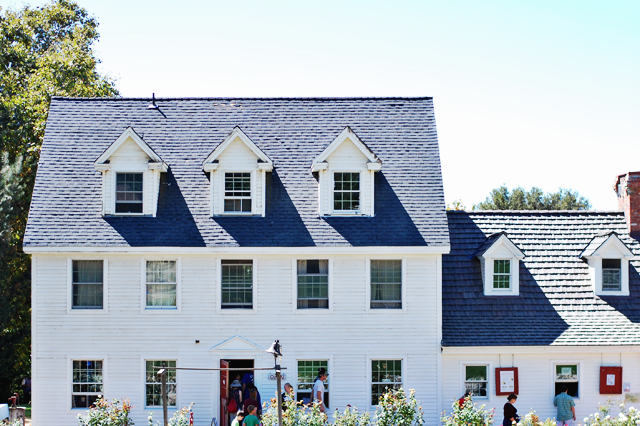 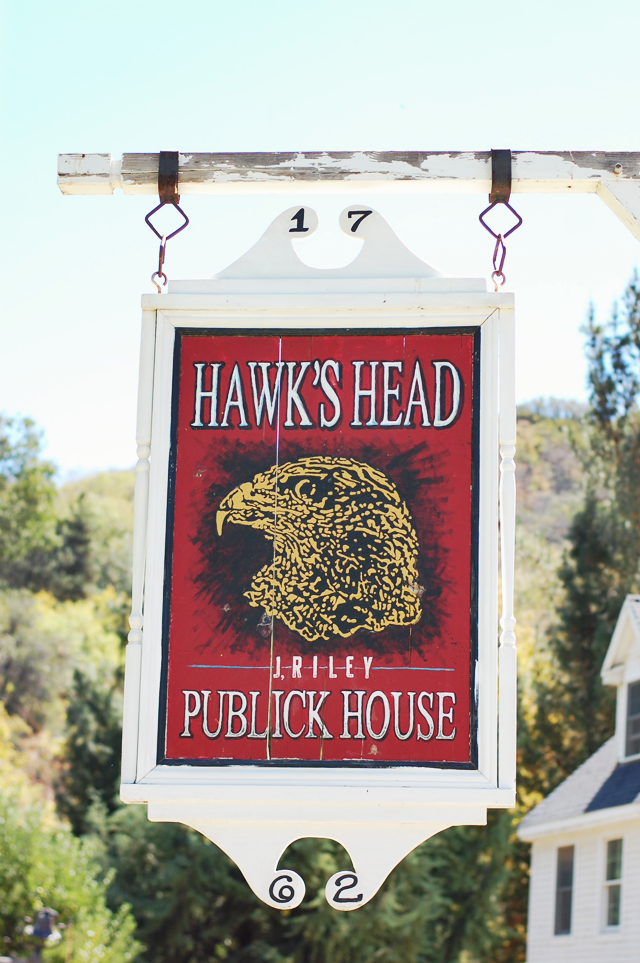 Riley's Apple Farm has different themed areas, and we stopped by the Colonial farm. They have a small general store full of trinkets and doodads, a restaurant serving country style food, and performances during the holidays. I'm still a little bummed we didn't stay for Sleepy Hollow. Guess I'll have to settle for Christopher Walken and Johnny Depp instead. How unfortunate! ;) 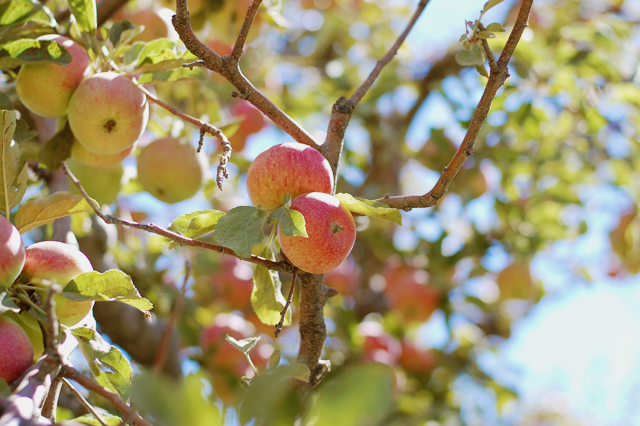 The farm isn't limited to apple orchards. They have pears, berries, pumpkin patches and the most beautiful zinnias! We hopped on and over a few pumpkins, smelled the flowers and took in the breathtaking views before saying bon voyage. 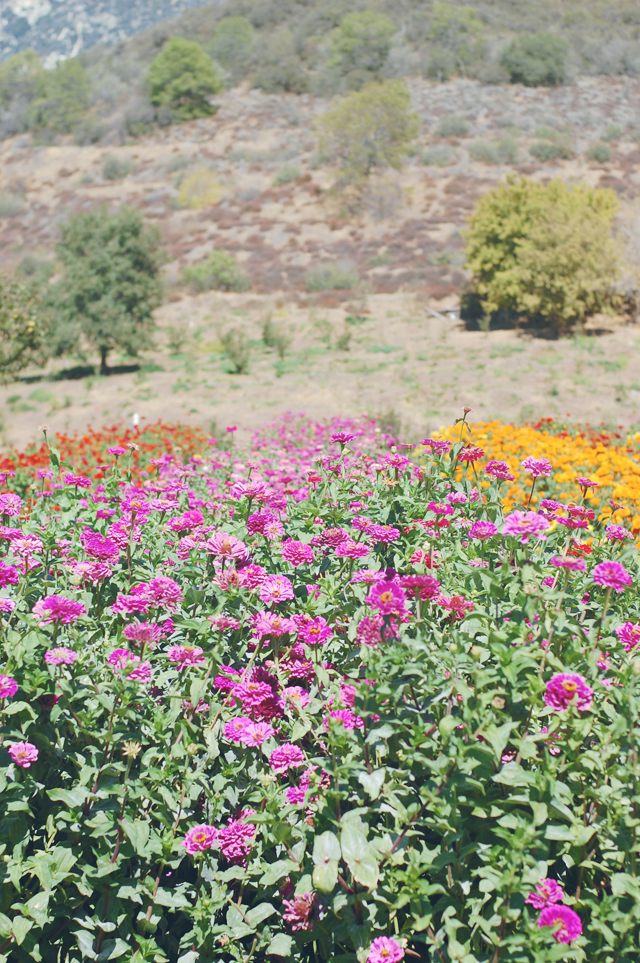 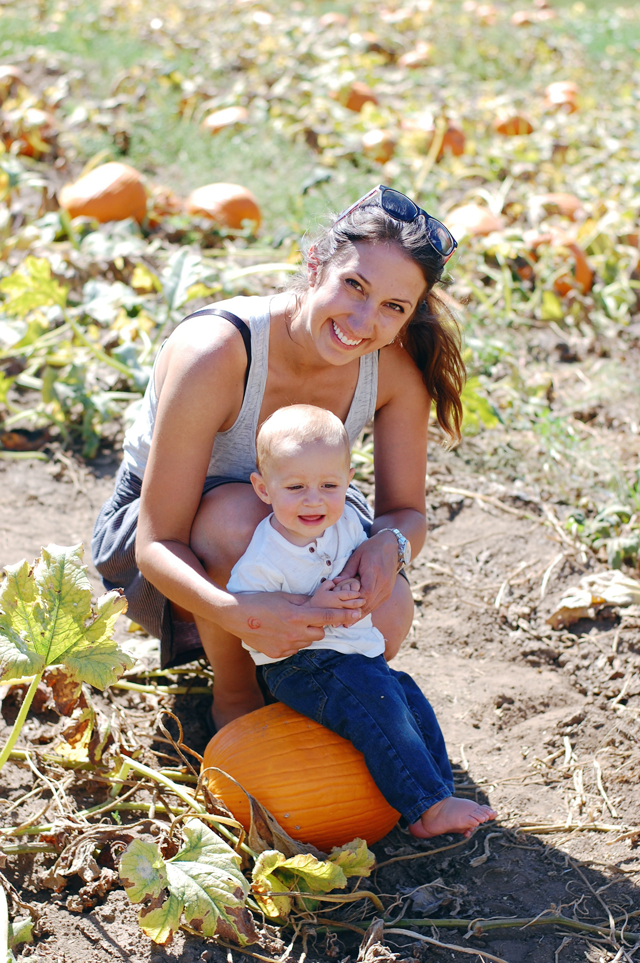 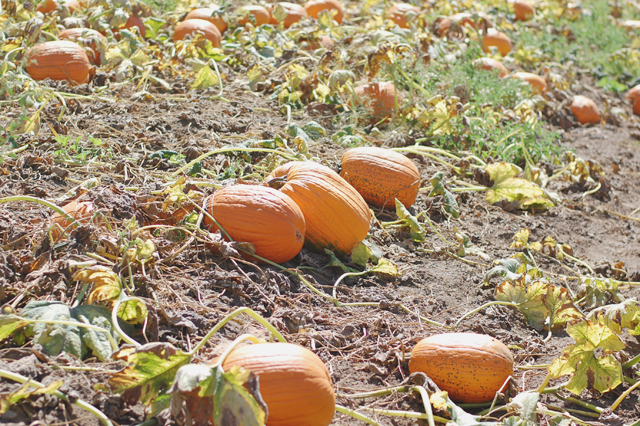 And now that I have all these apples coming out of my ears, I am making apple everything! Muffins have been checked off, a pie is next, and then who knows what else. All I know is that I really like this autumn season, even if the temperatures are still in the 90's.
Sponsored by Women Fashion Trend 2020