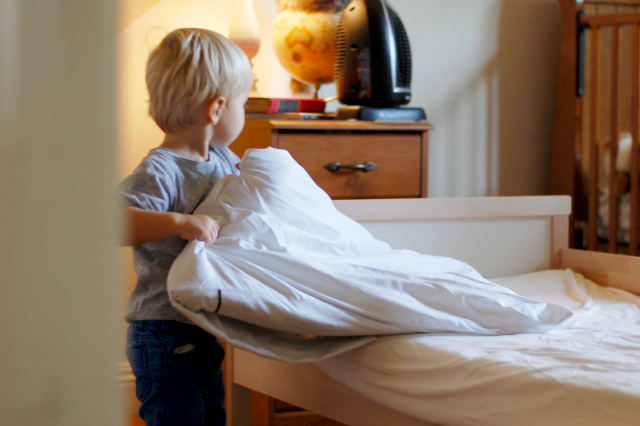 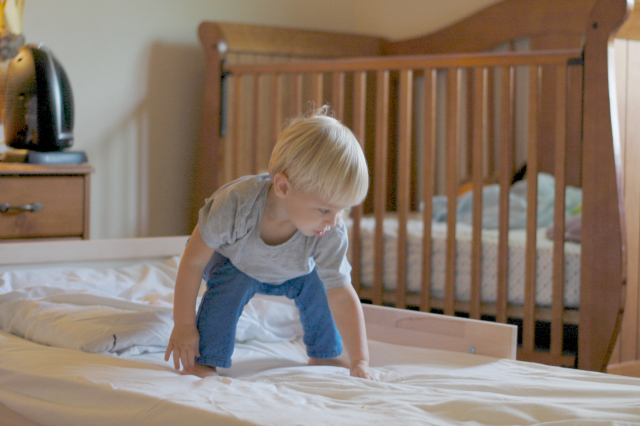 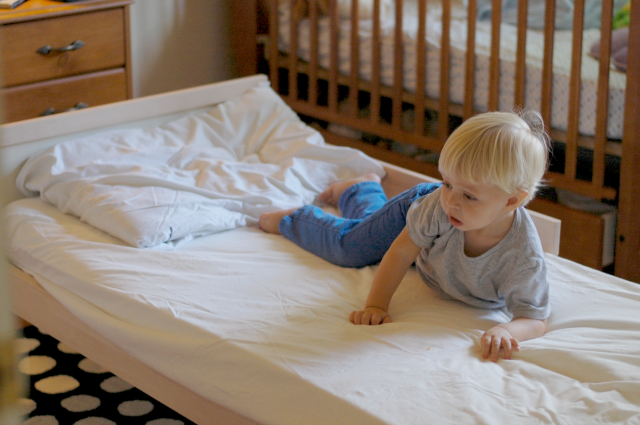 So, transitioning from a crib to a bed. It's a big deal in the world of the little fellows, especially when there is a new sibling involved. Since I've had a few mamas in the similar situation of having a small toddler and a newborn ask me how we went about the whole moving from crib to bed debacle, I thought I'd share our method.
We made the big switch a few months ago when Wes was born, in hopes of avoiding yet another life-altering change that would mess up Luke's routine. I'm a firm believer in routine. It's safe, predictable and makes for a secure kiddo. A new baby definitely can rock a 1-year old's world into a tizzy for a good, long while, so we wanted Luke's move from his crib to a bed to be positive and exciting.
Here's what we did...
1) We bought a toddler bed instead of a twin. This worked for us since we live in a small space and the boys share a room, although if we had the space we would have gone ahead with the twin to be more economical since it would last through many years. However, the toddler bed will last for at least a solid 5 years and I like to think it feels similar to the size of a crib, which is perhaps more comforting (my mom reasoning feels justified in that assumption)? His crib can convert into a bed, but it seemed the more logical route to purchase a bed instead of converting the crib and buying another crib. That would be just plain silly.
2) The initial plan was to switch before Wesley's arrival, so he didn't negatively associate his bed with him and all those adjustment shenanigans, but that didn't happen. And it still worked out great! We got the bed the week Wes was born, and Luke greeted it with excitement. We celebrated and made a grand to do over his "big boy bed" and he loved it! I almost think it worked out better because it was something we exclusively focused on for him, which as we all know is eaten up like a hot cake when the attention now has to be shared with a little brother.
3) We let Luke make the decision as to which bed he wanted to sleep in. Of course he chose the bed over the crib. The bed was exciting and a rite of passage to the world of big kid stuff! It took a few nights for the excitement of being able to get up and roam around as he pleased, but after 4 nights or so, he was sleeping soundly with no distractions. Luke still takes naps in the crib though, since the temptation of playing with all the toys in the light of day is too enticing (hashtag toddler problems).
4) I co-sleep with Wes, but on occasion I've put him in the crib for naps. To avert any possessive behavior, I've had Luke help me cover Wes up with his "mimi" (that's what we call our blankets) and tuck him in all snug. And that trick has worked, too!
This whole parenthood thing kind of feels like one big guessing game, and most often I find myself wondering if I am doing any of it right. But, Luke is a happy kid, so that has to count for something, right? He turns two tomorrow, which, I will admit, has me sweating at the palms a little bit. Two-year olds aren't really my favorite, so this year may be what you would call a challenge, but I am looking forward to the butt-whooping it will give me as a parent, to stretch and refine me just a tad more. It will teach me to have patience with myself and with others. Yes, there will be sand-throwing and shrieking tantrums and learning to not live in fear of the judgments of the dreaded park moms, but there will also be amazing conversations and discoveries and a budding, beautiful friendship of two brothers and their two crazy parents.
Sponsored by Women Fashion Trend 2020