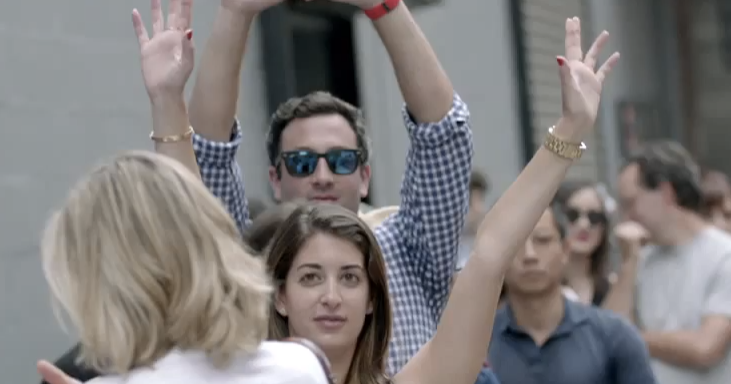 Y'all.
If you haven't heard of it already Jay Z did a six hour long performance piece in a gallery in Brooklyn recently for a video of his new song
Picasso Baby
.  It was inspired by a piece by
Marina Abramovic
titled
The Artist is Present
where she sat in the MoMA for 736 + hours as viewers were invited to sit across from her in silence.  I thought Abramovic's piece was beautiful and very emotional. Some thought it was B.S. as some are wont to think about contemporary art.
Jay Z's performance was also received with mixed reviews.  He rapped the same song for six hours while different audience members were invited to stand in front of him and interact.  I have watched the ten minute edited piece countless times this weekend and will admit to being moved to tears.  Make fun of me if you want but the performance overwhelmed me. I am a huge Jay Z fan anyway and really into popular culture as well so maybe for me it was a combination of all these different things that impacted me.  I love galleries. I love the neutral space and how artwork makes it come alive. The energy is real to me.  Seeing this pop cultural thing happening inside a space that is truly special to me made me crave artmaking in a way that I haven't craved in a long time. Lately I have set aside artmaking in favor of crafting  and trying to make more salable things.  This video made me want to sit down and draw again.
I love art that is interactive.  I love art that makes people feel excited and moved.  This type of performance may bring up many debates over what art is.  I know that for some the definition of art is very black and white and it must be a tangible object that has had "real" art materials applied to it. It must also not look like something their child could do or it will really be scoffed at. I think that art is the grey area in-between. It is the idea and the action.  The energy from Jay Z's piece is the art.
I have a master's degree in fine art but I am not trained in art criticism.  Maybe I am just starry eyed by celebrity culture but I do feel like something genuine happened here and it is exciting to me. And I am going to keep watching the video over and over again and stay inspired to work on my own stuff. The video is below for you to watch. If you do not like it that's totally fine.  It's not everyone's cup of tea and whatever your definition of art is you are not wrong.  There is something for everyone and that's what makes life beautiful.
[link VIDEO]
If I could have been there I would have stay the full six hours and not moved from my spot. What a crazy neat thing to get to witness.
This was right before the piece began and I feel like he is genuinely nervous.
Marina Abramovic did her thing!  Jay Z seemed uncomfortable at times by her actions but I think it was good. I feel like she showed up with the attitude of "I'll show you how to do a performance piece!"
Oh I love Allen Cummings!
Maryilyn Minter is charming but totally seems like a mom that went to a rap show. (:
Ack I died!
She was the cutest and caused Jay Z to mess up his lines a bit.
For real.
I had to make myself quit with the screen grabs or I would have shown the whole entire video still by still.
What did you think?  Shop Cute Gift For Girl And Gift For Boy