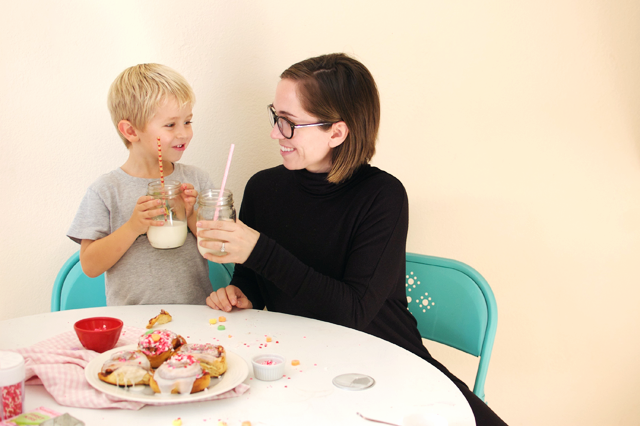 Last week, Luke and I walked through the baking aisle at the store on a specific hunt for sprinkles. He had his shopping basket on one arm, like always, and carefully inspected each container.
"Hmmm... I fink we should get this one!" he said, pointing to a large canister holding six types of pink and red sprinkles. He triumphantly transferred them from the shelf to his basket, and was ready for checkout. I impulsively threw some conversation hearts into the basket, mainly because they now have phrases like, "on fleek." 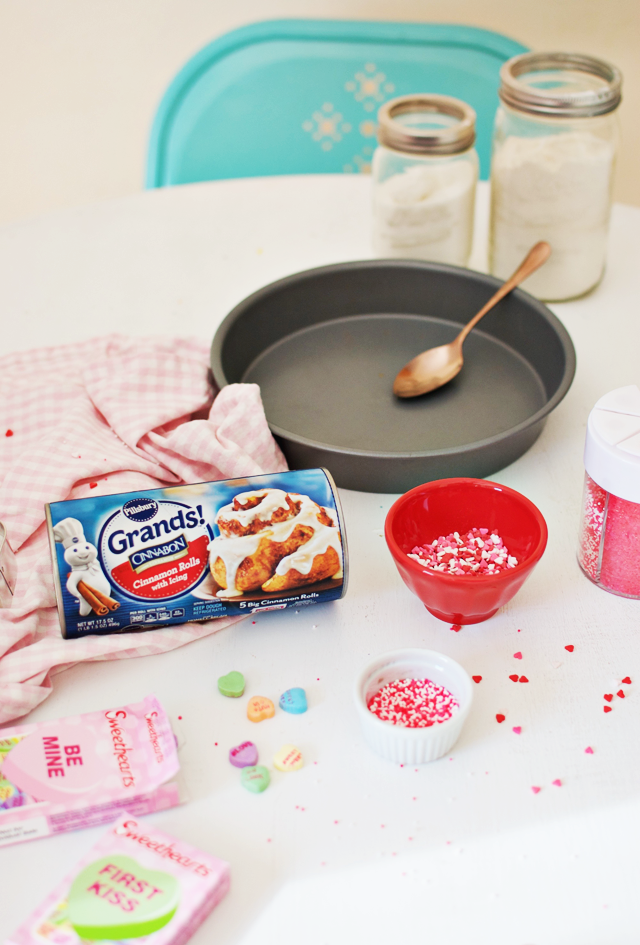 This great confectionary quest was for one mission: decorating our heart cinnamon rolls!
Since the days have been colder and rainy, we've been doing more quality activities indoors. The number one thing on our list is baking. This time around we decided to take our canned cinnamon rolls up a notch by forming them into shapes AND adding toppings.
We opted for heart cinnamon rolls with Valentine's Day approaching. They were quick, simple and fun! I totally suggest this activity if you're looking for something to do indoors and are fresh out of ideas and energy. 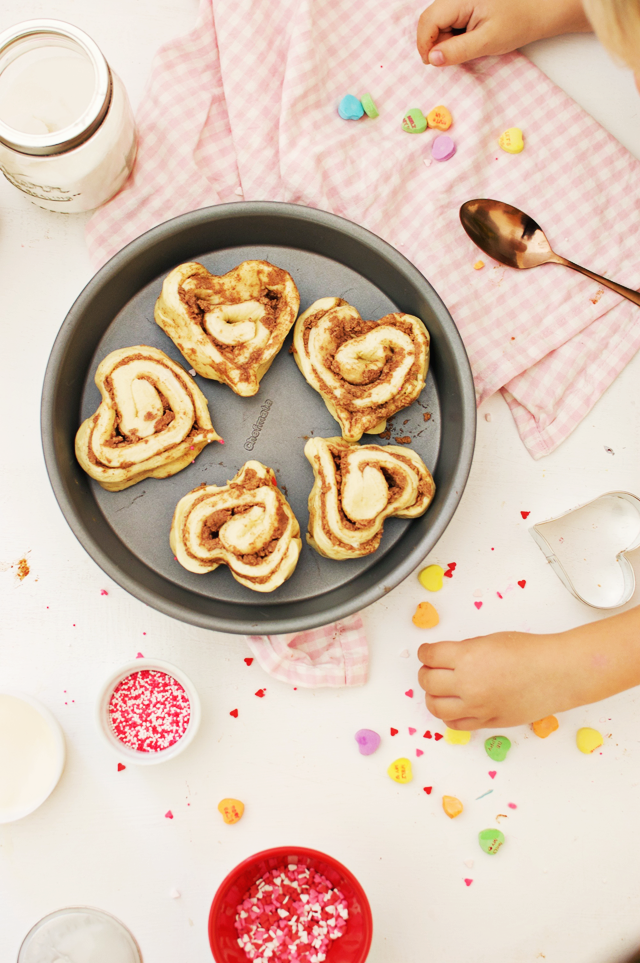 Here is how to make heart cinnamon rolls with kids:
1. Preheat the oven to 350°F. 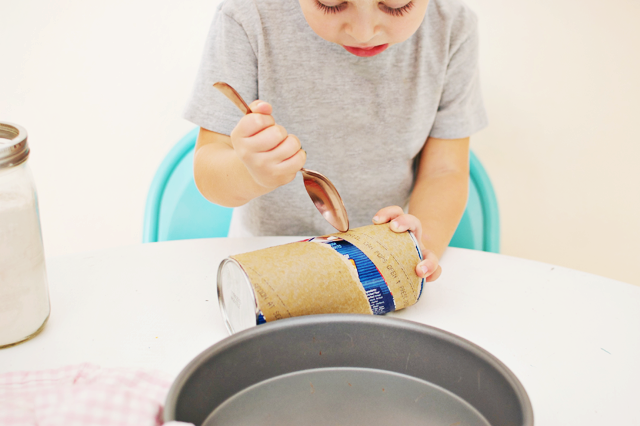 2. Open a can of Pillsbury™ Grands! Cinnamon Rolls, and let your little helper pop it open with the spoon. Remove them and form each one into a heart by pinching the bottom into a point, and using your finger to make an indent at the top to form the two ridges. (Take note that they do puff up and rise significantly, so they will lose a bit of their form once they are baked.) Place them on a greased baking sheet and bake for 22-25 minutes. 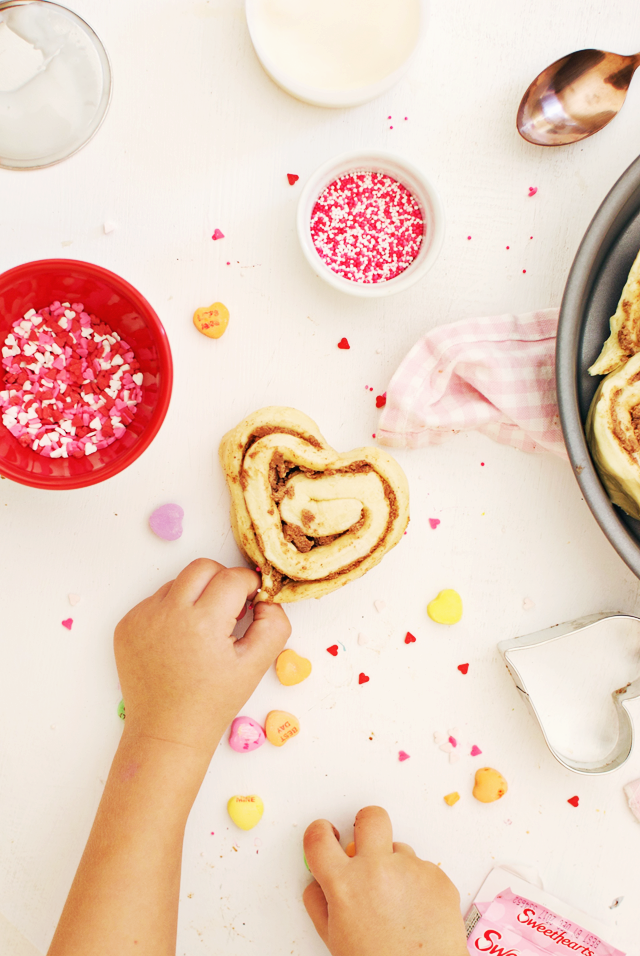 3. Remove from oven and ice them while warm. Add desired sprinkles and toppings and enjoy with a big glass of milk. Don't forget to cheers! 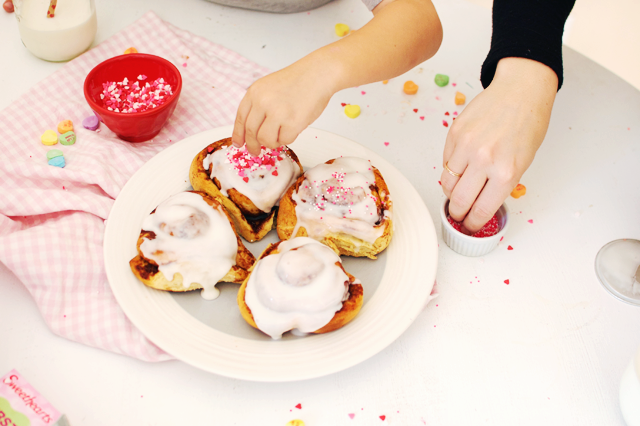