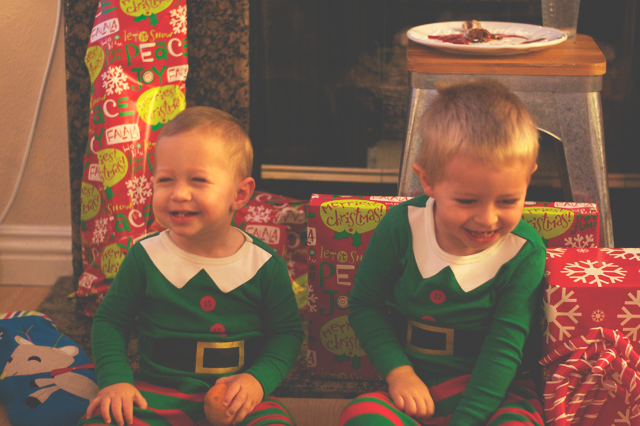 On Christmas morning at 6 am on the dot, Luke marched his way into our room just as he does every day. I didn't need to worry (and I never do) about setting an alarm to make sure he didn't go down without us because his sleeping schedule is like clockwork. (These are the joys of Christmas morning with little people. It's still predictable and easy to wrangle them in without running downstairs and spoiling all the fun.)
"Good morning, mama!" he chimed. I rolled over with a sleepy smile on my face and replied, "Merry Christmas, Luke! Guess what? Santa came last night!"
His face lit up and then we had a lengthy discussion (more like an interrogation because you know how 3-year-olds are with all the questions) about the affairs of sliding down the chimney and eating cookies and drinking milk.
About 45 minutes later, Wes was chirping from the other room signaling his grand entrance for the day, and off we bounded down the stairs to see what tricks Santa had up his sleeve this year!
(By the way, can we take a quick second to let that picture of Wesley's face sink in? It's the face he pulls when asked to smile. The kid is a ham with a side of goober berries.) 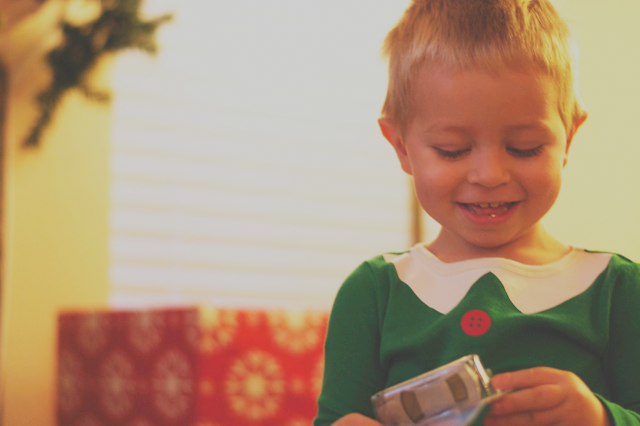 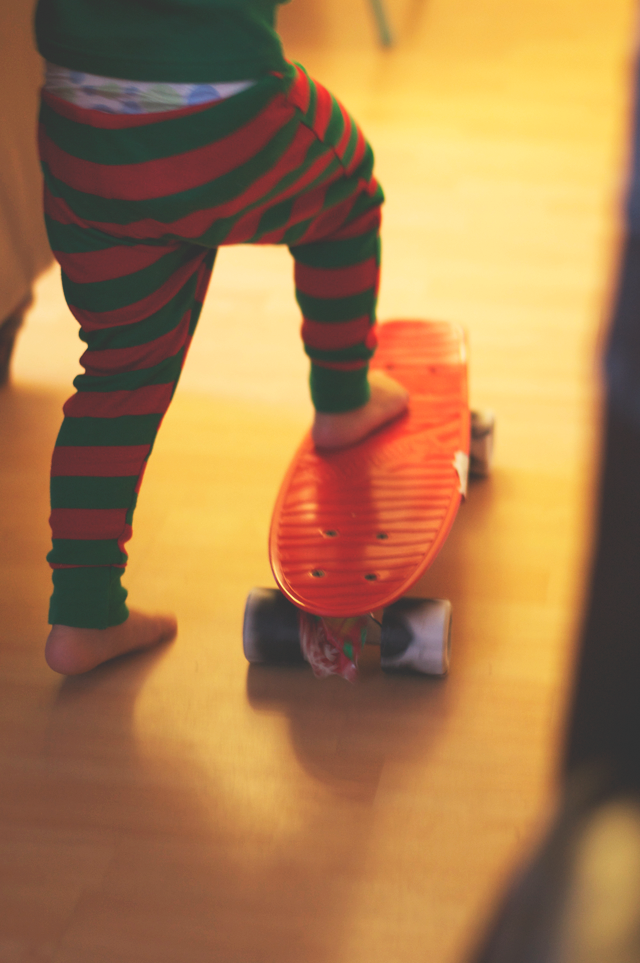 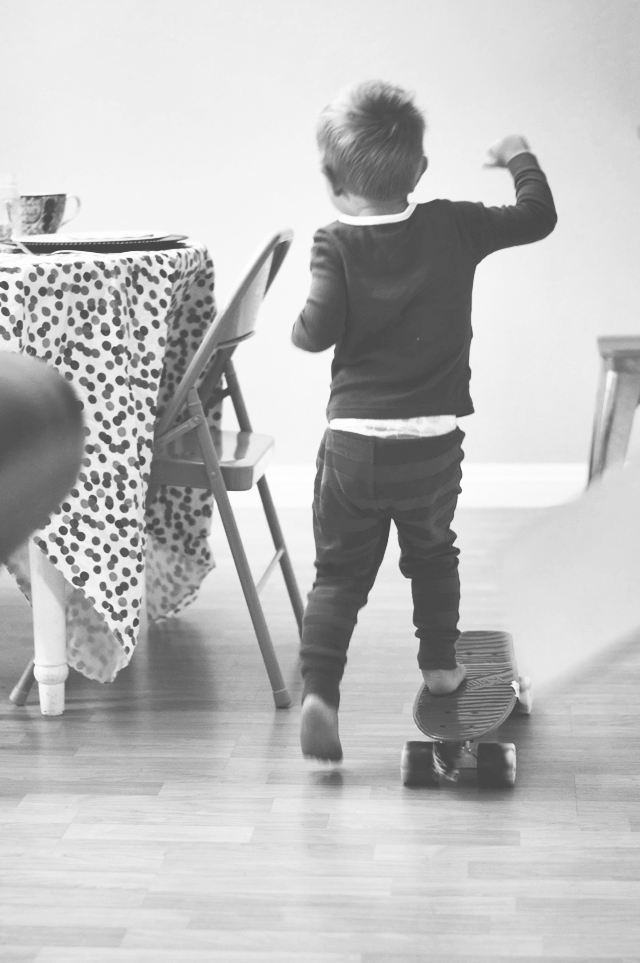 The looks on their faces were priceless. It's the kind of thing you wait to see your whole life, but you don't know you were waiting for. Does that make sense? I was more excited this Christmas than I have ever been, and had actual butterflies flitting around in my stomach as we sat out the toys on Christmas Eve. Their reactions didn't disappoint. There were sounds of crisp, ripping paper and those terribly annoying, plastic, wire doodads littered everywhere. But the best were the grins and gasps as each present revealed itself. 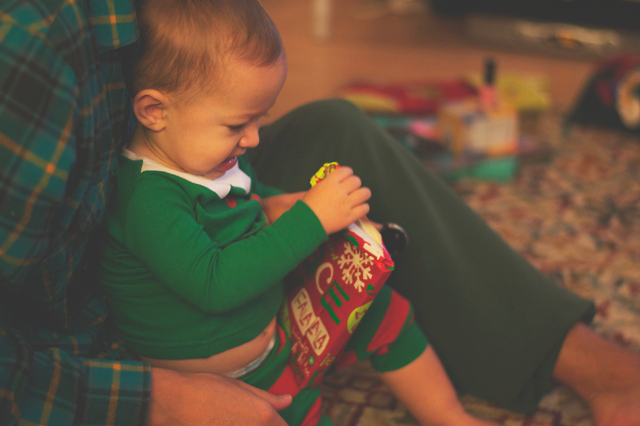 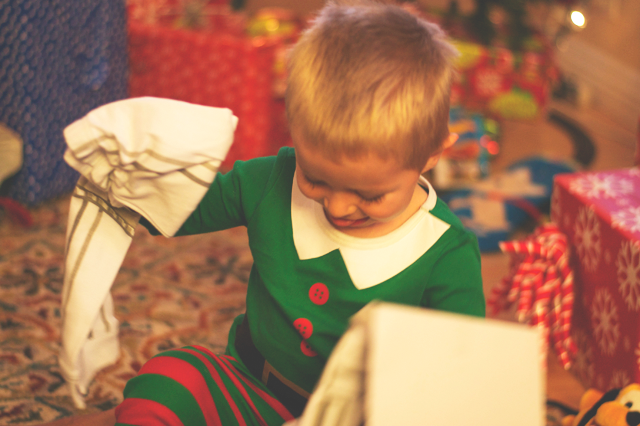 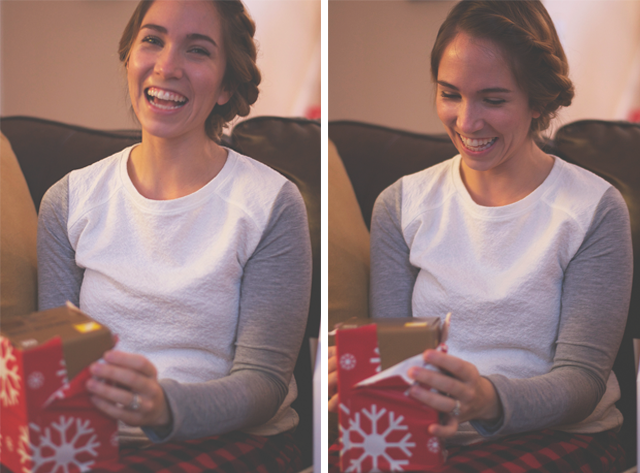 That right there is my excited face. 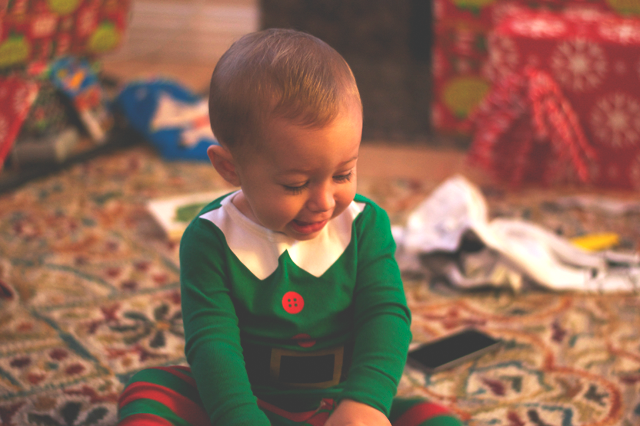 This is Wesley's. (Too freaking cute to handle.) 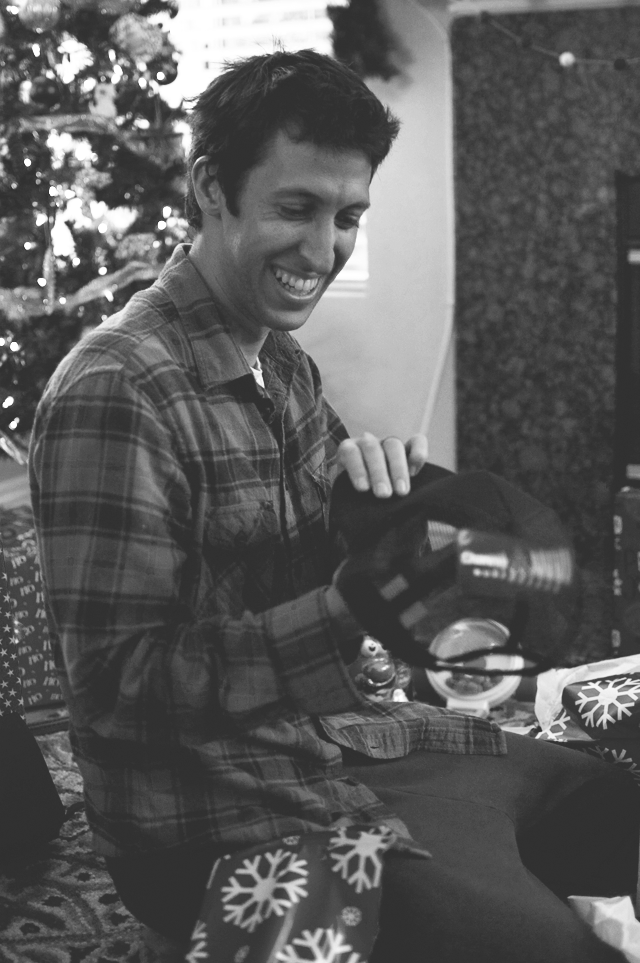 This is Matt's. (So much joy radiating from that handsome mug!) 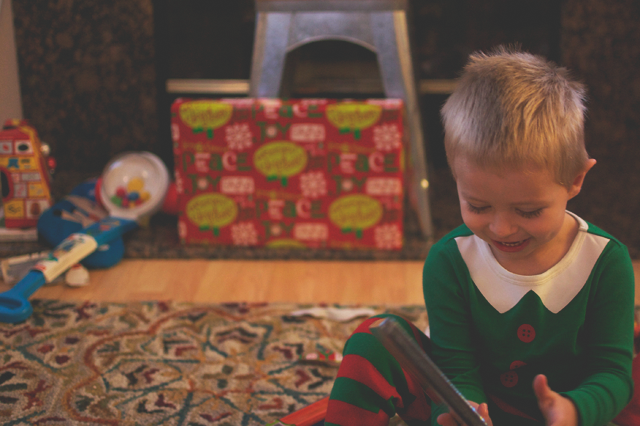 And this is Luke's. (Disney movies will do that to ya!) 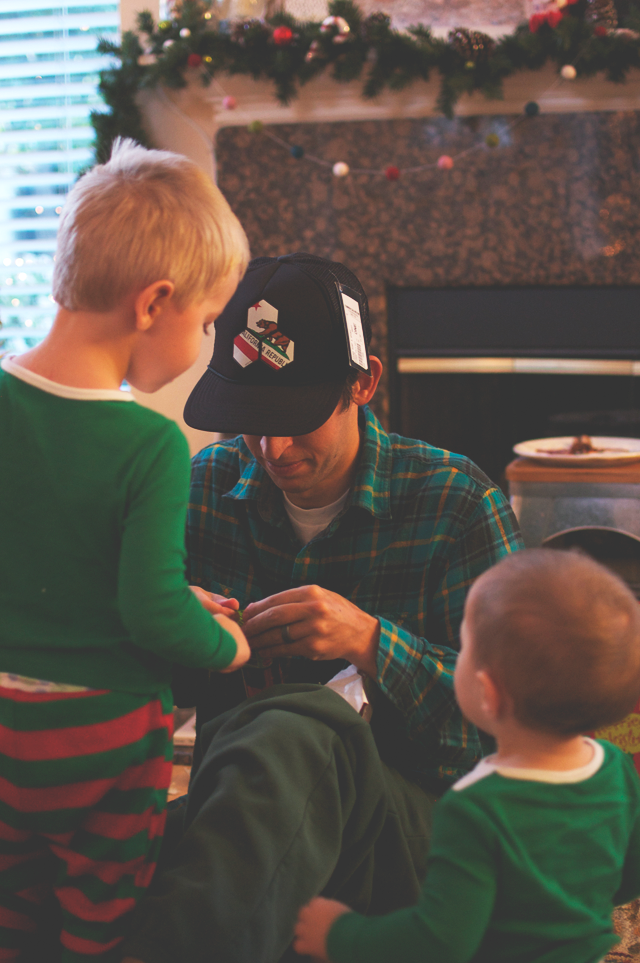 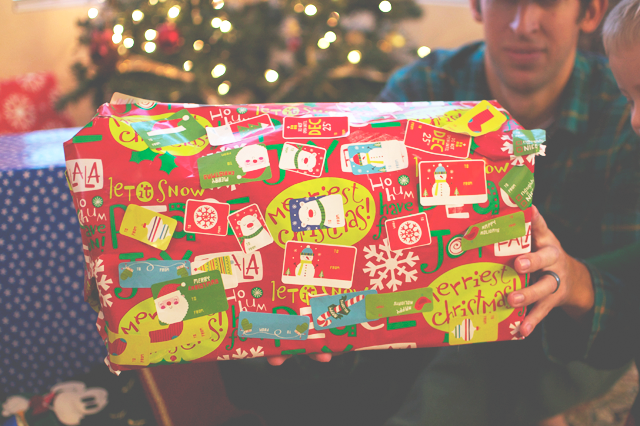 We need to talk about this present. This may seem like a boring, old picture of some horribly wrapped present which looks like Christmas barfed all over it. While that is true, this is going to be one of those pictures I look back on in 10 years and have a good chuckle over. You see, Luke was watching me attach all of the gift tag stickers to the gifts under the tree about a week before Christmas. The next day when I came downstairs after taking a shower I found this present covered in gift tags. He's found a serious, new love for stickers and he thought he was being the most diligent helper in all the world. He used the entire pack and then some, leaving none for the other gifts we still needed to tag, but I didn't even bother to buy more or care. All I could do was laugh and admire his handiwork. 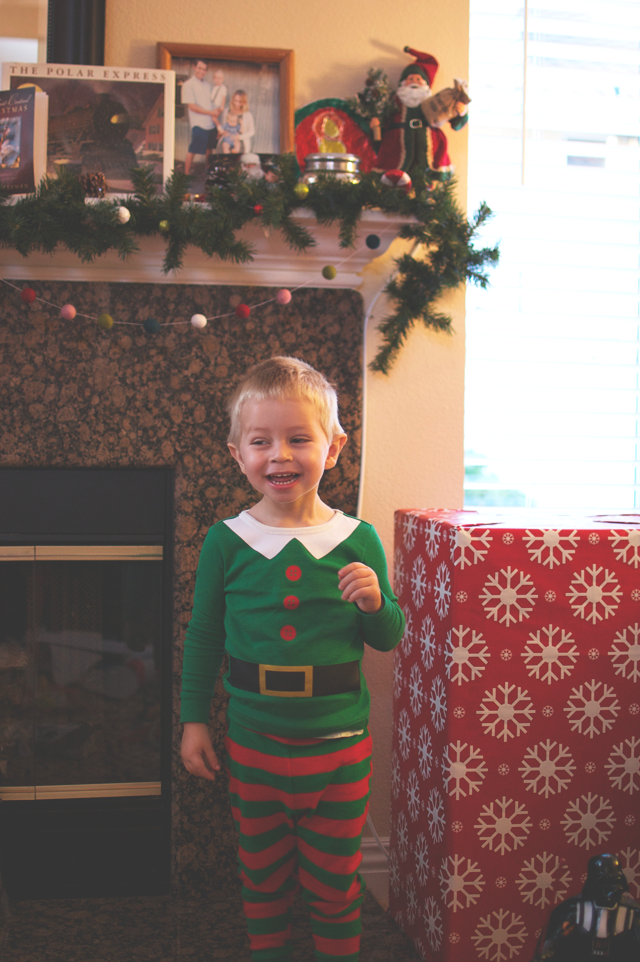 And then this is what he did when asking him to "smile like an elf!" 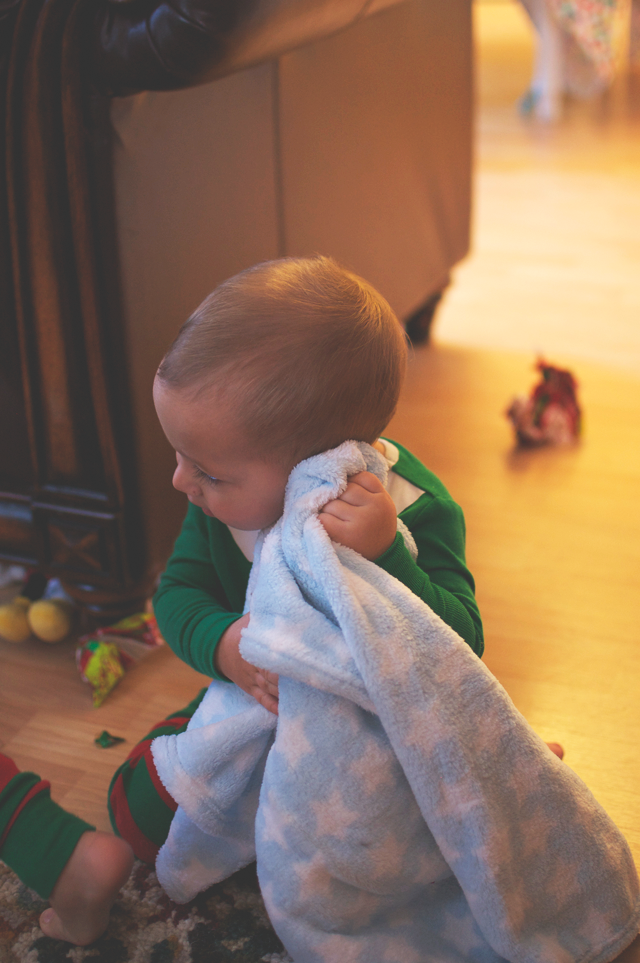 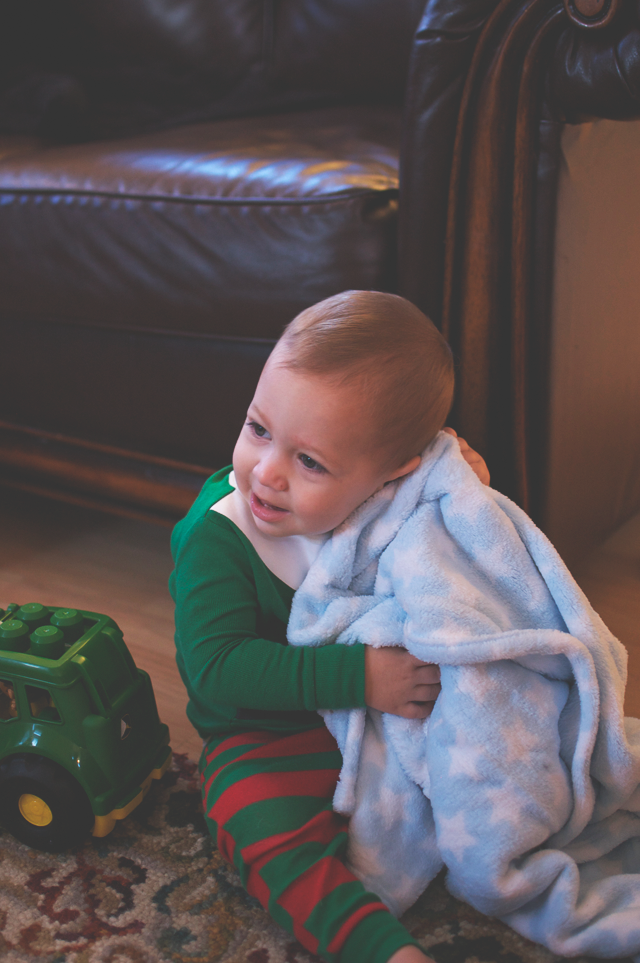 Let us take another minute to coo over yet another picture of Wesley being ADORABLE. He finally got a mimi (what we call blankies at our house) just like his big brother and this was the very first thing he did after we unwrapped it. And they haven't parted since. Such a beautiful love story, is it not? 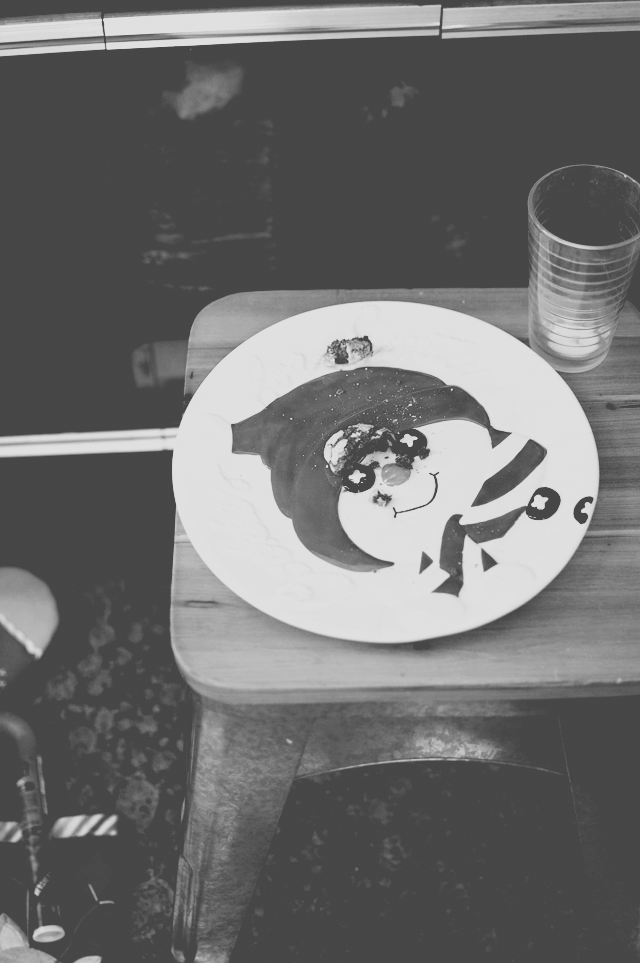 Santa ate all the cookies and drank all the milk! This was actually the first thing to be inspected upon coming downstairs Christmas morning. Luke approved of Santa's efforts. 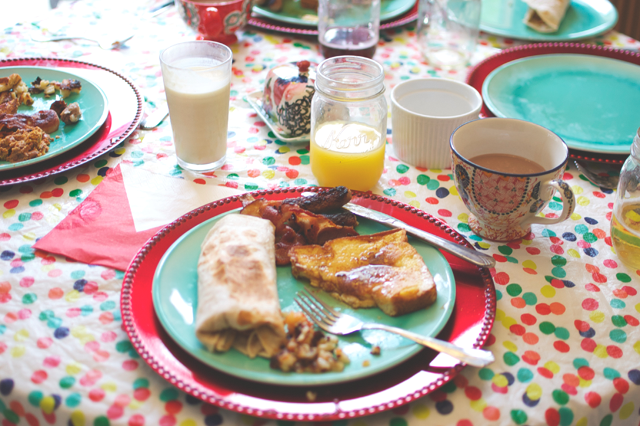 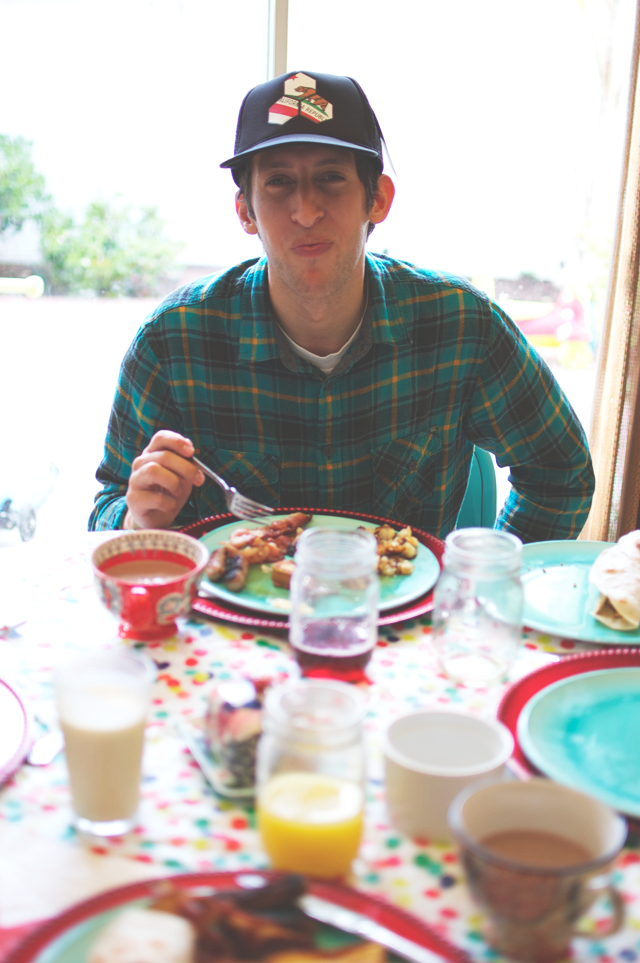 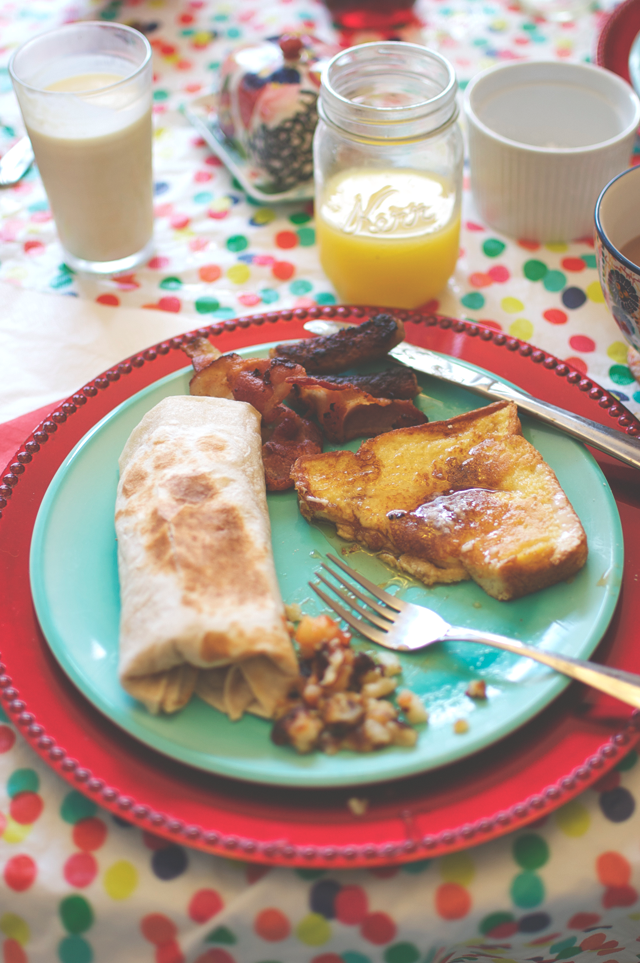 Ahhhh, my favorite part—the food! The very first year Matt and I were married we started the tradition of making the most ridiculous and grand Christmas breakfast. Or more like a Christmas break-feast. It has evolved over the years to include FIVE beverages. One for every dish, as I like to say. The french toast goes marvelously with the chocolate milk, the hashbrowns work nicely with the orange juice, the bacon pairs well with the sparkling cider, the sausage complements the grapey undertones in the grape juice, and the eggnog takes the edge off the churizo and eggs. Stay thirsty, my friends. 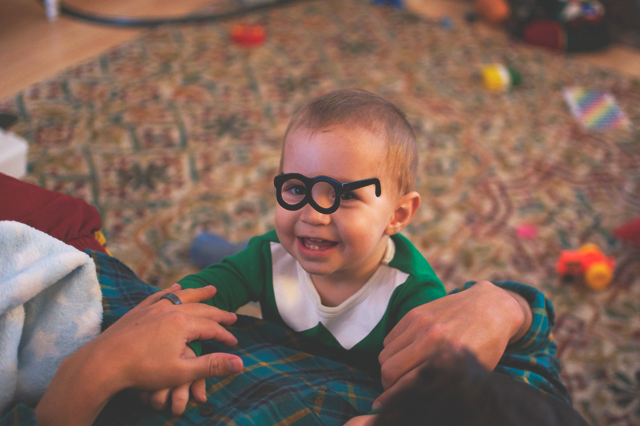 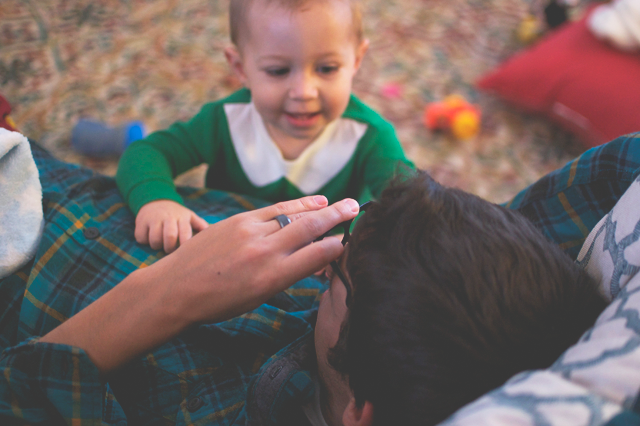 After we recovered from our food comas, we tried on Mr Potato Head's glasses, but decided they didn't go with any of our face shapes. We built car tracks looping from the stair railing, which launched into the new toy barn. We attempted to skateboard, but decided on boarding the Death Star instead. (But it's basically the same thing since I already wiped out on the skateboard in an attempt to look cool. Fail.) Oh, and Luke and Wes nearly finished off an entire bag of Butterfinger bells.
Christmas 2014 was a wonderful success, and I am overflowing with love and gratitude for my gang of boys. Hope you all had the most merry of Christmases, and here's to the happiest new year! 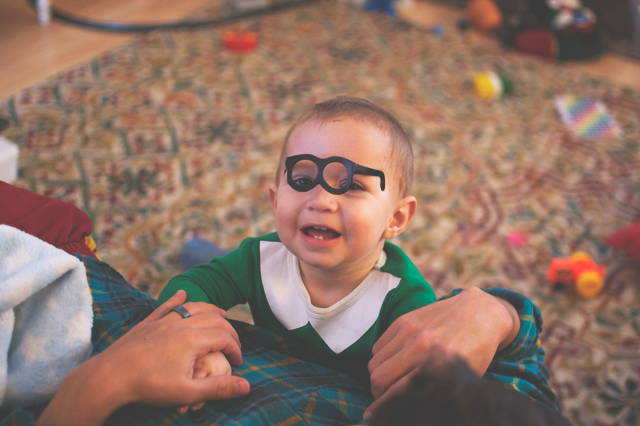